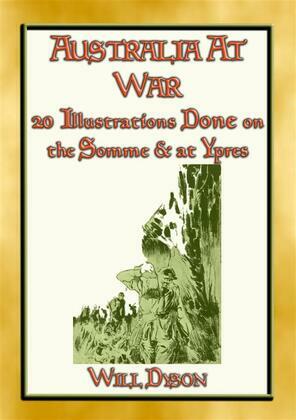 Herein are 20 illustrations made during the winters at Ypres and on the Somme by Will Dyson, even though he was wounded in their making. Dyson (1880 – 1938)  the official illustrator for the Australian Imperial Force (AIF). They reflect the misery and the depression of the material conditions of these campaigns than it does any of the soldiers exaltations or the typical cheerfulness which accompanied the Anzacs.
It is always difficult for a creative person, like an artist, to remain positive when faced with the horrors of war, but especially the horrors that WWI, the first modern war, brought. However, it is the soul rather than the body that he has drawn here, drawn out in long fantastic lines. In any case the lightest, wildest or even crudest sketch scratched down by Dyson has always had more of the true grip of gravity than the whole of the Royal Academy.
Indeed there is something significant in all that white light and sharp shadow which belongs to such dramatic scenes, and is so favourable to the art of black and white. There is even something of allegory in that awful and empty daylight in which armies live, so often without a stick of roof or a rag of curtain. All the soldiers in a great war are historical characters; but these are rather specially standing, not against court or camp, but only against the sky. They are under a light which will indeed prove eternal; even as compared with other historic groups their contribution has been written into the annals of history and will continue to be known forevermore.
10% of the net sale will be donated to charities by the publisher.
==============
KEYWORDS/TAGS: Australia at War, Will Dyson, World War One, World War 1, World War I, WWI, WW1, official, illustrations, Australian Imperial Force, AIF, twenty, 20, Australian, ANZAC, New Zealand, Kiwi, Okker, Aussie, Bringing Up The Stew, Report,  Battery, Dead Beat, The Cook, Group, Looking For, Battalion, Mate, Tunnellers, Under, German Territory, Coming Out, The Somme, Ypres, Battle of, Labour Battalion Man, Back, Waggon Lines, Polygon Wood, Delville Wood, Lightly Wounded, Menin Road, Dressing Station, Stretcher-Bearers, Martinpuich, Peronne, Waiting For The Stew, food, hot, In The Tunnel, Hill 60, Fatalist, Outside, Pill Box, Hanging About, Down, The Ridge, France, Flanders, fields, Pas-de-Calais, Hauts-de-France