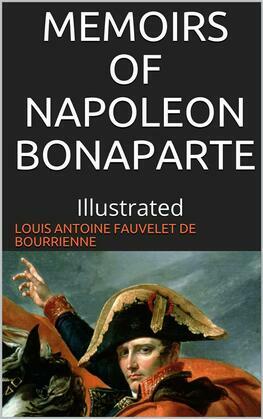 by Louis Antoine Fauvelet de Bourrienne (Author)
Buy for €1.49 Excerpt
Nonfiction Literary collections
warning_amber
One or more licenses for this book have been acquired by your organisation details

This edition is accompanied by 11 unpublished illustrations.

Louis Antoine Fauvelet de Bourrienne (July 9, 1769 – February 7, 1834) was a French diplomat, born in Sens. He is famous for his Memoirs of Napoleon Bonaparte, a work based on years of intimate friendship and professional association. They met at the Military Academy at Brienne in Champagne when eight years old.

Described on its title page as the "Memoirs of Napoleon Bonaparte by Louis Antoine Fauvelet de Bourrienne, his private secretary, to which are added an account of the important events of the Hundred Days, of Napoleon's surrender to the English, and of his residence and death at St. Helena, with anecdotes and illustrative extracts from all the most authentic sources, edited by R.W. Phipps. Colonel, late Royal Artillery."