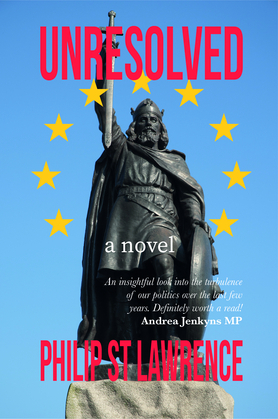 by Philip St. Lawrence (Author)
Buy for $5.44 Excerpt
Fiction Thrillers Political Mystery & detective Historical
warning_amber
One or more licenses for this book have been acquired by your organisation details

Interesting and intelligent, Maggie Taylor is in a relationship with the rakish Onslow Ratcliffe - two civil servants supposedly on the same side negotiating Britain’s exit from the EU. With her love of history, Maggie studies lessons from Churchill, but also the story of Alfred the Great’s darkest hour in his own fight for freedom. As we follow his incredible story with her, she discovers the folly of Britain’s ‘negotiation’ as Downing Street sells the Withdrawal Deal. Amidst mayhem in London and high drama in Brussels, she realises she is an accomplice to Britain’s humiliation and calculated betrayal. “Remoaners rumbled and Brexiteers betrayed are twin themes in this tale of an Establishment plot. Conspiracy theorists will love its portrayal of a flouted Referendum, a sabotaged negotiation and an outraged electorate. Of course, that couldn’t really happen in 21st century Britain.... could it?” Julian Lewis MP. (Chair, Commons Defence Select Committee)