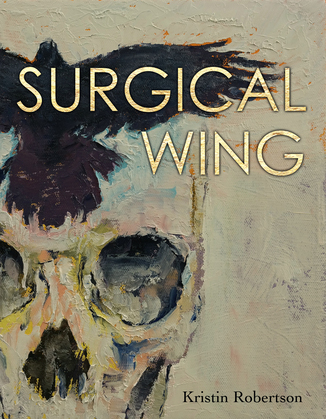 by Kristin Robertson (Author)
Buy for $13.99 Excerpt
Fiction Poetry
warning_amber
One or more licenses for this book have been acquired by your organisation details

“In Surgical Wing, you will find yourself in phone booths, county fairs, fishing boats, and among ghosts. Strange birds will enter hospital waiting rooms. You will be seduced by knot-makers. You will witness illness, grief, and healing. Finally, the book itself will become the wings that steer you to a greater understanding of yourself and the world.” —Anna Silver

In Surgical Wing, surrealistic poems visit an experimental hospital ward, manifesting visions of winged angels and medical tests, as we bear witness to a doctor’s’ meddling and miracles. Robertson’s poems challenge the internal and external metamorphoses of the human condition and the juxtaposition between death and life by personifying the soul through images of birds.

From “You’re About to Fold a Paper Airplane”:

Build evidence of air. Pull the results of your blood test
from the mailbox. Fold in half: you have wings already.

Abnormal? Fold again. You can’t see the inner-workings
of an aircraft. And when you’re folding, you can’t study

much else. Book your tumor markers a flight to Bora Bora.
Vector, Victor. Clearance, Clarence. On any scrap of paper

write carry. Write heavenward. Write I choose this over you.
Replace this. With flying. With peregrination. Or write

I can’t fear you another morning. And fold.

Kristin Robertson is a native of East Tennessee, and she graduated with a PhD in creative writing from Georgia State University in Atlanta. Her poetry has appeared or is forthcoming in Harvard Review, Indiana Review, TriQuarterly, Third Coast, and Verse Daily, among other journals. Kristin lives outside Los Angeles and teaches at the University of California, Riverside.