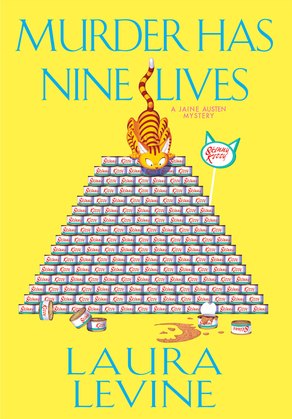 Jaine Austen Mysteries #14
Jaine Austen #14
by Laura Levine (Author)
Buy for $7.59 Excerpt
Fiction Mystery & detective Women sleuths English literature American and Canadian literature
warning_amber
One or more licenses for this book have been acquired by your organisation details
“Jaine’s flair for the well-turned phrase puts her in the top tier of do-it-yourself detectives”—from the author of Death by Tiara (Kirkus Reviews).

The future is looking bright for freelance writer Jaine Austen. She’s signed up for a new job, she’s looking forward to a tropical vacation, and her cat Prozac is slated to star in a major commercial. But when the claws come out behind the scenes, Jaine worries that murder might be the only thing to meow about . . .

A writer’s life is far from glamorous. Still, Jaine's new gig to write an ad campaign for Toiletmasters’ new line of self-flushing toilets comes with a few perks—including a date with the president’s dreamy nephew. And with a much-needed trip to Maui on the horizon, it seems life couldn’t get any better—until her cat Prozac is tapped to star in a Skinny Kitty commercial. But Jaine never would have guessed the world of feline food could be quite so catty . . .

Jaine is nervous that Prozac won’t be able to take direction, but the finicky furball ditches her diva behavior for the camera, eating and napping on cue like a seasoned pro. But just as Jaine begins dreaming of fame and fortune, Skinny Kitty’s inventor drops dead on the set. Everyone is a suspect—including Jaine. And she’ll have to get her paws on the truth before the killer takes a swipe at another victim . . .

Praise for the Jaine Austen mysteries