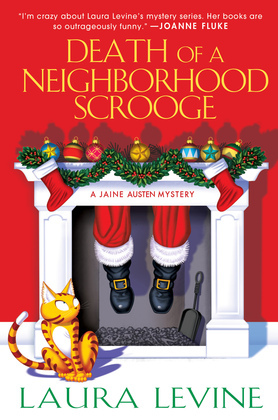 Death of a Neighborhood Scrooge

Jaine Austen #16
by Laura Levine (Author)
Buy for $7.59 Excerpt
Fiction Mystery & detective Women sleuths English literature American and Canadian literature
warning_amber
One or more licenses for this book have been acquired by your organisation details
“Exemplary . . . a thoroughly enjoyable cozy with just the right balance of crime, humor, and holiday spirit” by the author of Death of a Bachelorette (Publishers Weekly, starred review).

Freelance writer Jaine Austen is feeling festive about spending Christmas house-sitting at a posh Bel Air mansion, accompanied by her friend Lance and her cat, Prozac. But when a grumpy neighbor gets himself iced, she’ll have to find the culprit or she may spend the New Year in jail . . .

Scotty Parker is a former child star who once played Tiny Tim, but now he’s grown up into the role of neighborhood Scrooge. He cuts the wires on his neighbors’ Christmas lights and tells local kids that Santa had a stroke. And his miserly, bah-humbug attitude lasts year-round—a fact known all too well by his current wife, his ex-wife, his maid, and many more.

Scotty thinks he can stage a comeback with the screenplay he’s working on (The Return of Tiny Tim: Vengeance Is Mine!), and Jaine’s been reluctantly helping him edit it. So when Scotty is bludgeoned with a frozen chocolate yule log and the police start making a list of suspects and checking it twice, Jaine’s name is unfortunately included. True, she’s been under some stress, with Lance trying to set her up on dates and her fickle feline taking a sudden liking to someone else—but she’s not guilty of murder. Now she just has to prove it . . .

Praise for the Jaine Austen mysteries