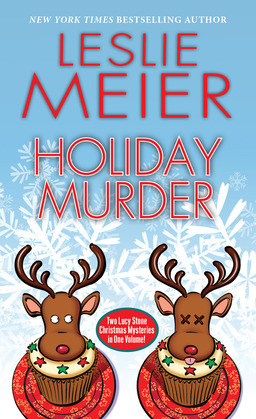 by Leslie Meier (Author)
Buy for $8.54 Excerpt
Fiction Mystery & detective Hard-boiled Women sleuths
warning_amber
One or more licenses for this book have been acquired by your organisation details

For Lucy Stone, Christmas in Tinker’s Cove, Maine, isn’t just about the gift of giving. Sometimes it’s also about solving a crime or two . . .

Mistletoe Murder
The First Lucy Stone Mystery!
As if Lucy Stone’s Christmas schedule wasn’t busy enough, she’s also working nights at the famous mail-order company Country Cousins. But when she discovers its very wealthy founder, Sam Miller, dead in his car from an apparent suicide, Lucy’s gift for suspecting murder shines bright. Now she must track down an elusive killer—one who won’t be satisfied until everyone on his shopping list is dead, including Lucy herself . . .

Christmas Cookie Murder
One of the best things about Christmas in Tinker’s Cove has always been the annual Cookie Exchange. But when long-simmering petty rivalries and feuds finally come to a boil, accusations of recipe theft lead to an act of murder. Despite all of the ingredients for danger, Lucy sets out on the trail of a killer and soon uncovers a shocking Christmas secret best left unopened . . .