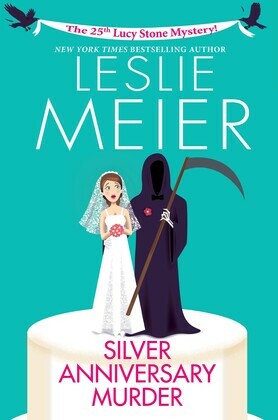 by Leslie Meier (Author)
Buy for $7.59 Excerpt
Fiction Mystery & detective Women sleuths
warning_amber
One or more licenses for this book have been acquired by your organisation details
A Maine sleuth makes her way to New York City to find the killer of a thrice-divorced friend: “I like Lucy Stone a lot, and so will readers.”—Carolyn Hart

As Tinker’s Cove, Maine, buzzes over a town-wide silver wedding anniversary bash, Lucy Stone is reminded of her own nuptials and ponders the whereabouts of Beth Gerard, her strong-willed maid of honor. Lucy never would have made it down the aisle without Beth’s help, and though the two lost touch over the years, she decides to reach out. It takes only one phone call for Lucy to realize that a reunion will happen sooner than later—at Beth’s funeral.

Beth, who was in the process of finalizing her fourth divorce, had a reputation for living on the edge—but no one believes she’d jump off a penthouse terrace in New York City. The more Lucy learns about Beth’s former husbands, the more she suspects one of them committed murder.

Summoning her friend’s impulsive spirit, Lucy vows to scour New York from the Bronx to the Brooklyn Bridge in search of the killer. With each ex dodgier than the last, it’s not long before Lucy’s investigation leads her to a desperate criminal who will do anything to get away—even if it means silencing another victim…