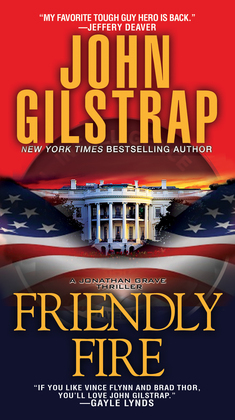 by John Gilstrap (Author)
Buy for $9.49 Excerpt
Fiction Mystery & detective Suspense Action & adventure English literature American and Canadian literature
warning_amber
One or more licenses for this book have been acquired by your organisation details

A seemingly random act of violence leads a rescue specialist to uncover a terrorist conspiracy in this thriller by the New York Times bestselling author.

It begins with a shocking act of vengeance. Barista Ethan Falk chases a customer into the parking lot and kills him. He tells police that years ago the older man abducted and tortured him. Then Ethan's story takes an even stranger turn: he says he was rescued by a guy named Scorpion. Of course, there is no record of either the kidnapping or the rescue, because Scorpion--Jonathan Grave--operates outside the law and leaves no evidence.

Now Grave must find a way to defend the young man without blowing his cover. And the task takes on new urgency when he learns the dead man was connected to an ongoing terrorist plot against America. It's up to Grave and his team to stop it. But first they must rescue Ethan Falk—a second time.
Format
EPUB
Protection
Watermark
Publication date
July 01, 2016
Publisher
Pinnacle Books
Collection
A Jonathan Grave Thriller
Page count
512
ISBN
9780786035083
Paper ISBN
9780786035076
lyrics Synchronized text and audio playback