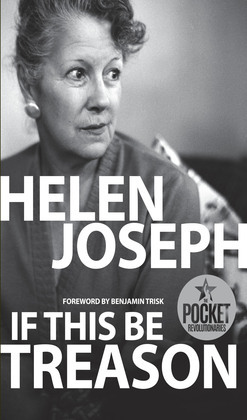 If This Be Treason

Helen Joseph, founding member of the ANC’s ally, the Congress of Democrats, was one of the main organisers in the Women’s March of 9 August 1956. Arrested on a charge of high treason in 1956, and banned the next year, Helen suffered constant persecution. The first person in South Africa to be placed under house arrest, she survived several assassination attempts. In this personal account, Joseph writes about enduring the Treason Trial – one of the longest and most important trials in South African history, where she stood accused along with Nelson Mandela and Walter Sisulu. With disarming honesty, she shares stories of the women’s prison, the behind-the-scenes discussions with their defence team, the constant daily humiliations, but also their perseverance and small triumphs. This book, originally banned and not available for decades, adds a vital dimension to our understanding of South Africa’s recent history.