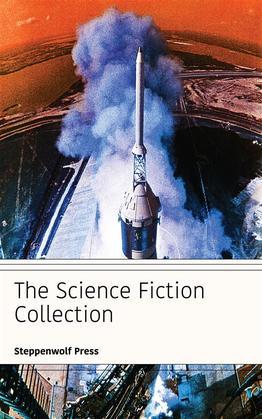 One of the greatest sci fi collections available, with over 125 awesome tales from the masters of the genre.

The Sentimentalists, by Murray Leinster

The Girls from Earth, by Frank Robinson

The Death Traps of FX-31, by Sewell Wright

Song in a minor key, by C.L. Moore

The Drivers, by Edward Ludwig

Sentry of the Sky, by Evelyn E. Smith

Meeting of the Minds, by Robert Sheckley

Easy Does It, by E.G. von Wald

Cost of Living, by Robert Sheckley

With These Hands, by C.M. Kornbluth

A Little Journey, by Ray Bradbury

Hunt the Hunter, by Kris Neville

Psychotennis, anyone?, by Lloyd Williams

The 3rd Party, by Lee Holum

The Drug, by C.C. MacApp

An Elephant For the Prinkip, by L.J. Stecher

License to Steal, by Louis Newman

The Last Letter, by Fritz Lieber

The Stuff, by Henry Slesar

The Celestial Hammerlock, by Donald Colvin

Always A Qurono, by Jim Harmon

A Fall of Glass, by Stanley Lee

Thy Name Is Woman, by Kenneth O’Hara

All Day Wednesday, by Richard Olin

One Martian Afternoon, by Tom Leahy

Planet of Dreams, by James McKimmey

Prelude To Space, by Robert Haseltine

The Elroom, by Jerry Sohl

Slaves of Mercury, by Nat Schachner

Sound of Terror, by Don Berry

The Big Tomorrow, by Paul Lohrman

The Happy Man, by Gerald Page

The Last Supper, by T.D. Hamm

The Earthman, by Irving Cox, Jr.

The One and the Many, by Milton Lesser

The Other Likeness, by James Schmitz

Money Is the Root of All Good, by Patrick Wilkins

The Outbreak of Peace, by H.B. Fyfe

The Skull, by Philip K. Dick

The Smiler, by Albert Hernhunter

The Unthinking Destroyer, by Roger Phillips

With a Vengeance, by J.B. Woodley

The Valor of Cappen Varra, by Poul Anderson

A Bad Day for Vermin, by Keith Laumer

Hall of Mirrors, by Frederic Brown

The Ethicators, by Willard Marsh

The Nothing Equation, by Tom Godwin

The Last Evolution, by John Campbell

A Hitch in Space, by Fritz Leiber

On the Fourth Planet, by J.F. Bone

The K-Factor, by Harry Harrison

Sodom and Gomorrah, Texas, by R. A. Lafferty

Keep Out, by Frederic Brown

All Cats are Gray, by Andre Norton

A Problem in Communication, by Miles J. Breuer

The Terrible Tentacles of L-472, by Sewell Peaslee Wright

Marooned Under the Sea, by Paul Ernst

The Murder Machine, by Hugh B. Cave

The Attack from Space, by Captain S. P. Meek

The Knights of Arthur, by Frederik Pohl

And All the Earth a Grave, by C.C. MacApp

The Brain, by Alexander Blade

The Judas Valley, by Gerald Vance

The Moon is Green, by Fritz Leiber

The Next Logical Step, by Ben Bova

The Year When Stardust Fell, by Raymond Jones

Year of the Big Thaw, by Marion Zimmer Bradley