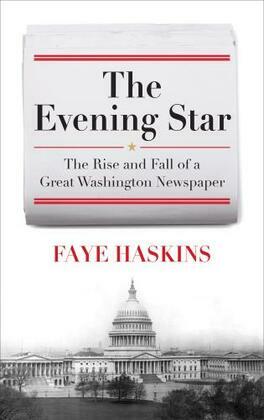 The Evening Star: The Rise and Fall of a Great Washington Newspaper is the story of the 129-year history of one of the preeminent newspapers in journalism history when city newspapers across the country were at the height of their power and influence. The Star was the most financially successful newspaper in the Capital and among the top ten in the country until its decline in the 1970s. The paper began in 1852 when the capital city was a backwater southern town. The Star’s success over the next century was due to its singular devotion to local news, its many respected journalists, and the historic times in which it was published. The book provides a unique perspective on more than a century of local, national and international history.

The book also exposes the complex reasons for the Star’s rise and fall from dominance in Washington’s newspaper market. The Noyes and Kauffmann families who owned and operated the Star for a century play an important role in that story. Patriarch Crosby Noyes’ life and legacy is the most fascinating –a classic Horatio Alger story of the illegitimate son of a Maine farmer who by the time of his death was a respected newspaper publisher and member of Washington’s influential elite. In 1974 his descendants sold the once-great newspaper Noyes built to Joseph Allbritton. Allbritton and then Time, Inc. tried to save the Star but failed.