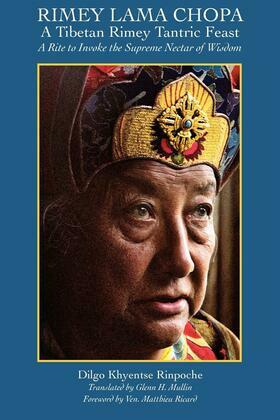 A Tibetan Rimey Tantric Feast
by Dilgo Rinpoche Khyentse (Author), Glenn Mullin (Translator)
Buy for $7.99 Excerpt
Nonfiction Religion Buddhism
warning_amber
One or more licenses for this book have been acquired by your organisation details

Dilgo Khyentse Rinpoche (1910-1991) was one of the greatest Tibetan Buddhist teachers of the 20th century. While a practitioner in the Nyingma lineage, he held empowerments and teachings from many traditions and was a strong supporter of the Rimey non-sectarian movement. This Rimey Lama Chopa is a liturgical guruyoga text encompassing all stages of the Path to Enlightenment, with special emphasis on the Eight Chariots Rimey lineages. Lama Chopa is one of the central esoteric practices of Vajrayana Buddhism; and as such, this text is a unique and powerful contribution to world spiritual literature. On the centennary of Dilgo Khyentse's birth, a great celebration was held in Nepal, for which a locally-printed English edition of his well-known Rimey Lama Chopa was commissioned. The limited English edition was created by Glenn Mullin, a well-known Canadian Buddhist translator with many books to his credit. We are fortunate to have received permission from Mr. Mullin to create this new edition. In addition, we are fortunate to have the participation of Dilgo Khyentse's chief western disciple, the Venerable Matthieu Ricard, who has written an insightful foreword for the book and provided personal photographs of Rinpoche for this edition. 50% of profits from sales of this book will go to benefit charitable activities of Rinpoche's Karuna-Shechen Foundation in the Himalayas.