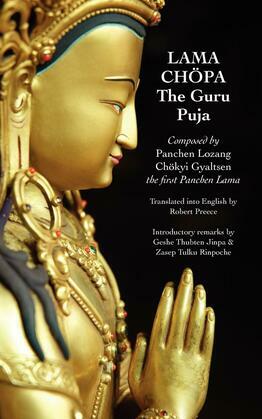 The Guru Puja
by Lozang Chokyi Panchen Gyaltsen (Author), Rob Preece (Translator)
Buy for $7.99 Excerpt
Nonfiction Religion Buddhism
warning_amber
One or more licenses for this book have been acquired by your organisation details

Lama Chopa is a practice of guru devotion special to the Gelugpa tradition of Tibetan Buddhism. In Sanskrit, lama is guru, and chopa is offering, so Lama Chopa translates into English as “offering to the spiritual guide.” In the Gelugpa tradition, there are many guru yoga sadhanas, but Lama Chopa is the most popular and sacred text. A special practice of Je Tsongkhapa (1357-1419), the founder of the Gelugpa School, Lama Chopa was compiled by the first Panchen Lama, Panchen Lozang Chokyi Gyaltsen (1570-1662), who was the teacher of the fifth Dalai Lama (1617-1682). Lama Chopa became so popular in Tibet and Mongolia that almost every monk of the Gelugpa tradition had it memorized, and recited it on a daily basis, both in the temple as a group practice, and individually.
Lama Chopa is considered to be an Anuttarayoga Tantra or Highest Yoga Tantra practice. As indicated by the opening words, “Arising within the sphere of great bliss, I manifest as a Guru Yidam,” it contains the idea of personal transformationthrough the practitioner merging his or her mind with the guru as the meditational deity. The essence of the practice is to see the guru as an Enlightened Being, a Buddha, and to receive his or her blessings in return. Twenty-five percent of profits from sales of this book go to the Panchen Lama's monastery in exile, Tashilhunpo, in India.