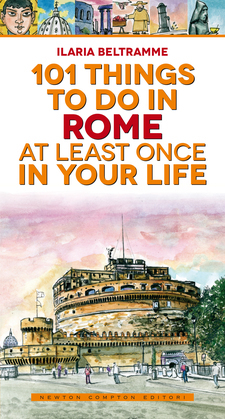 What do the ruins of the Palatine Hill have in common with the humble chairs of a vintage dairy? And what unites the unique flavour of pajata with the heady scent of roses in full bloom? The common thread is Rome's eternal existence which, step by step, hill by hill and century after century, winds its way around the many faces of the city - its most famous monuments as well as those secret corners where an imposing past unexpectedly reveals its riches. In these one hundred and one itineraries, Ilaria Beltramme invites the reader to discover the Eternal City in all its facets, from the masterpieces of Caravaggio to the working-class suburbs of Pier Paolo Pasolini, from contemplating Baroque architecture to sampling the city's oldest, most traditional dishes, and from the remains of the imperial age to the most vital, colourful markets of today. A Rome which resides in the majestic and in the humble - in the splendour of ancient nobility as well as in the memories and streets of its sovereign people. An immortal Rome, to explore in one hundred and one moves. One hundred and one walks, and one hundred and one experiences that you really should have at least once in your life.

Rome as you've never seen it!