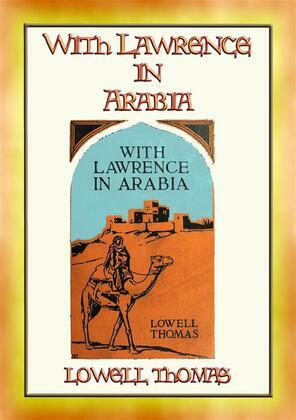 WITH LAWRENCE IN ARABIA - The Recorded Adventures of T.E. Lawrence in Arabia

Herein are the facts of the story of T.E. Lawrence and his adventures and achievement in Arabia, collated by Lowell Thomas (April 6, 1892 – August 29, 1981) and his cameraman Harry Chase who travelled with T E Lawrence during 1917 and 1918.

In Thomas’ own words: “To do this I must turn back the pages of time to the days when, accompanied by my photographic colleague, Mr. Harry A. Chase, and two other assistants, I left America to gather information and secure a pictorial record of the various phases of the struggle that was then in progress all the way from the North Sea to far-off Arabia. We had set forth early in 1917 and were expected to return at the end of a year or so to help in the work of stimulating enthusiasm for the Allied cause.

First we went to the Western Front, but the trenches had little to inspire the American public. We then went to Italy where he heard of General Allenby's campaign against the Ottoman Empire in Palestine. We travelled to Palestine as an accredited war correspondent, where in late 1917 we met Capt. T. E. Lawrence in Jerusalem.
It is from this point on I began to collect the pieces of the story of Allenby’s conquest of the Holy Land, and the hitherto unknown story of Lawrence and the war in the Land of the Arabian Nights, which was later dramatised in the film “Lawrence of Arabia.”

During the time that Mr. Chase and I were in Arabia, I found it impossible to extract information from Lawrence himself regarding his own achievements. He insisted on giving the entire credit to Emir Feisal and other Arab leaders, and to his fellow-adventurers, Colonel Wilson, of the Sudan, Newcombe, Joyce, Dawney, Bassett, Vickery, Cornwallis, Hogarth, Stirling, etc., all of whom did magnificent work in Arabia. So to them I went for much of my material, and I am indebted to various members of this group of brilliant men whom General Clayton used in his Near Eastern Secret Corps. Eager to tell me of the achievements of their quiet, scholarly companion, they refused to say much about themselves, although their own deeds rivaled those of the heroes of “The Arabian Nights.”

However, there are others infinitely better qualified than I to give the world a full account of the Arabian Revolution. But it is to Lawrence himself that we must look for the inside story of the war in the Land of the Arabian Nights.