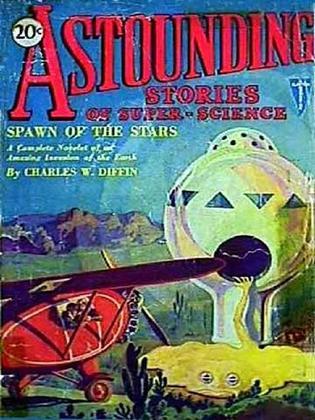 Tom's Extraordinary Machine Glowed—and the Years Were Banished from Old Crompton's Body. But There Still Remained, Deep-seated in His Century-old Mind, the Memory of His Crime.

"Spawn of the Stars", by Charles Willard Diffin

The Earth Lay Powerless Beneath Those Loathsome, Yellowish Monsters That, Sheathed in Cometlike Globes, Sprang from the Skies to Annihilate Man and Reduce His Cities to Ashes.

"The Corpse on the Grating", by Hugh B. Cave

In the Gloomy Depths of the Old Warehouse Dale Saw a Thing That Drew a Scream of Horror to His Dry Lips. It Was a Corpse—the Mold of Decay on Its Long-dead Features—and Yet It Was Alive!

"Creatures of the Light", by Sophie Wenzel Ellis

He Had Striven to Perfect the Faultless Man of the Future, and Had Succeeded—Too Well. For in the Pitilessly Cold Eyes of Adam, His Super-human Creation, Dr. Mundson Saw Only Contempt—and Annihilation—for the Human Race.

"Into Space", by Sterner St. Paul

What Was the Extraordinary Connection Between Dr. Livermore's Sudden Disappearance and the Coming of a New Satellite to the Earth?

Bullets, Shrapnel, Shell—Nothing Can Stop the Trillions of Famished, Man-sized Beetles Which, Led by a Madman, Sweep Down Over the Human Race.

The Sixty Stories of the Perfectly Constructed Colossus Building Had Mysteriously Crashed! What Was the Connection Between This Catastrophe and the Weird Strains of the Mad Musician's Violin?

The Teller Turned to the Stacked Pile of Bills. They Were Gone! And No One Had Been Near!