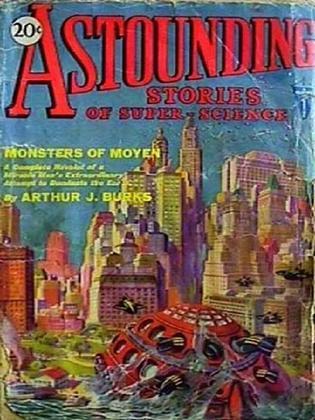 "The Man Who Was Dead", by Thomas H. Knight

As Jerry's Eyes Fell on the Creature's Head, He Shuddered—for the Face Was Nothing but Bone, with Dull-brown Skin Stretched Taut over It. A Skeleton That Was Alive!

"The Western World Shall be Next!" Was the Dread Ultimatum of the Half-monster, Half-god Moyen.

"Vampires of Venus", by Anthony Pelcher

Leslie Larner, an Entomologist Borrowed from the Earth, Pits Himself Against the Night-flying Vampires That Are Ravaging the Inhabitants of Venus.

Out of Awful Space Tumbled the Space-ship Planetara Towards the Moon, Her Officers Dead, With Bandits at Her Helm—and the Controls Out of Order!

"The Soul Snatcher", by Tom Curry

From Twenty Miles Away Stabbed the "Atom-filtering" Rays to Allen Baker in His Cell in the Death House.

Dr. Bird Uncovers a Dastardly Plot, Amazing in its Mechanical Ingenuity, Behind the Apparently Trivial Eye Trouble of the President