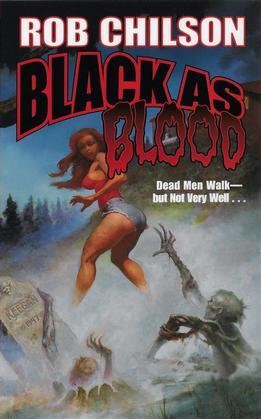 by Rob Chilson (Author)
Buy for €2.99
Fiction Action & adventure Horror Nonfiction Humor
warning_amber
One or more licenses for this book have been acquired by your organisation details

In a world where the dead walk, however poorly, for a corpse to sit up at his funeral and curse his ex-partner is shocking but not unheard of.  Murder, mayhem, and mirth follow, involving partner Bernie McKay, "Hat" Stetson and his redneck friends, Justin Waley the sword-swinging accountant, and Rod Parker the troll-like deputy sheriff in a search for stolen gold, for revenge, for the truth.

Bernie McKay jumped and looked around in the dim room.  Someone was coming at him from the kitchen!  He had stumbled away from the stair, so he ran and ducked behind the couches around the coffee table, heart beating quickly.  It came into the light from the window.

Uncle Albert's face gleamed waxily, pulled back and fixed into a scowl, teeth gleaming.  His eyes were swelling, popping out, despite the embalming.  He cawed and croaked, no longer able to speak intelligibly — but hatred still animated him enough to send him shambling around the coffee table and its couches.  His best suit was incongruously festive, the diamond winking from his tie, shirt sleeves open where he'd lost his studs, black shoes scuffed.

"Back — get back—"  Bernie danced sideways, spun a chair into the thing's way.

It patiently fumbled the fallen chair aside, never taking its gaze off him.  "Raw Raw Rawrr."  It came on, not fast, not slow, more than ever like some wind-up machine, clumsy, powerful, unsophisticated.

Bernie was frightened, but despite that he had a sudden flood of unreality.  It was too absurd a picture, himself confronting this tenacious dead thing from which all rationality had departed.  What would the neighbors think?  A flash of anger shook him.

"You stupid asshole!" he barked.  "You can't come in here like this—"

Ignoring him, it got close enough to lunge.  Sweating, Bernie danced around again, brief anger gone and choky fear back.  It wouldn't ever stop coming—  He gripped the smaller of the couches.  When it turned and started for him again, he aimed the couch like a pool cue and thrust with panicky strength.

It was too slow to dodge and was bowled over backward.  Shrieking You old bastard, Bernie was running for it even as it fell.  He grabbed a chair and made a full overhand sweep with it, staggering as its legs bounced off the ceiling.  It came down with diminished force on Uncle Albert's unprotected head.

Wood or bone crunched, and Bernie raised the chair again, panting, glaring.  This time he swept it around in a lower arc, but the corpse let itself fall backward to raise its arms.  The chair crashed into them and did little harm.  Before he could pull it back, Uncle Albert, cawing, had seized it.  For a moment there was a nightmarish tug of war over the chair, then Bernie released it, falling back to the fireplace.

The corpse struggled slowly to its feet; Bernie wasted time fumbling for the poker because he couldn't bear to look away from it.  When he finally had it, the corpse was upright and swinging the chair back over its head, stumbling toward him.

Quickly Bernie ran at it, taking advantage of its slow clumsiness, to shove it.  But that brought him face to face with it, and into its evil putrid chemical odor.  He almost panicked, eyeball to eyeball with Death.