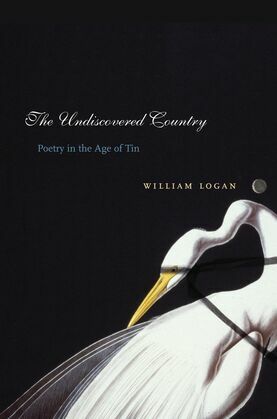 Poetry in the Age of Tin
by William Logan (Author)
Buy for $31.99 Excerpt
Nonfiction Literary essays
warning_amber
One or more licenses for this book have been acquired by your organisation details

William Logan has been called both the "preeminent poet-critic of his generation" and the "most hated man in American poetry." For more than a quarter century, in the keen-witted and bare-knuckled reviews that have graced the New York Times Book Review, the Times Literary Supplement (London), and other journals, William Logan has delivered razor-sharp assessments of poets present and past. Logan, whom James Wolcott of Vanity Fair has praised as being "the best poetry critic in America," vividly assays the most memorable and most damning features of a poet's work. While his occasionally harsh judgments have raised some eyebrows and caused their share of controversy (a number of poets have offered to do him bodily harm), his readings offer the fresh and provocative perspectives of a passionate and uncompromising critic, unafraid to separate the tin from the gold.

The longer essays in The Undiscovered Country explore a variety of poets who have shaped and shadowed contemporary verse, measuring the critical and textual traditions of Shakespeare's sonnets, Whitman's use of the American vernacular, the mystery of Marianne Moore, and Milton's invention of personality, as well as offering a thorough reconsideration of Robert Lowell and a groundbreaking analysis of Sylvia Plath's relationship to her father.

Logan's unsparing "verse chronicles" present a survey of the successes and failures of contemporary verse. Neither a poet's tepid use of language nor lackadaisical ideas nor indulgence in grotesque sentimentality escapes this critic's eye. While railing against the blandness of much of today's poetry (and the critics who trumpet mediocre work), Logan also celebrates Paul Muldoon's high comedy, Anne Carson's quirky originality, Seamus Heaney's backward glances, Czeslaw Milosz's indictment of Polish poetry, and much more.

Desperate Measures (2002)"When it comes to separating the serious from the fraudulent, the ambitious from the complacent, Logan has consistently shown us what is wheat and what is chaff.... The criticism we remember is neither savage nor mandarin.... There is no one in his generation more likely to write it than William Logan."—Adam Kirsch, Oxford American

Reputations of the Tongue (1999)"Is there today a more stringent, caring reader of American poetry than William Logan? Reputations of the Tongue may, at moments, read harshly. But this edge is one of deeply considered and concerned authority. A poet-critic engages closely with his masters, with his peers, with those whom he regards as falling short. This collection is an adventure of sensibility."—George Steiner