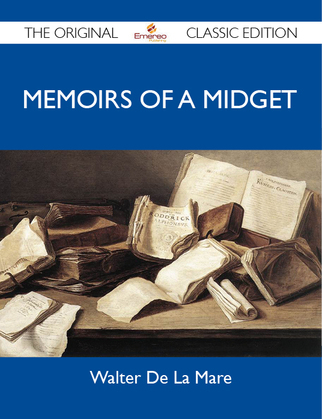 Memoirs Of A Midget - The Original Classic Edition

by Walter De La Mare (Author)
Buy for $7.95 Excerpt
Fiction
warning_amber
One or more licenses for this book have been acquired by your organisation details

Finally available, a high quality book of the original classic edition of Memoirs Of A Midget.

This is a new and freshly published edition of this culturally important work by Walter De La Mare, which is now, at last, again available to you.

Enjoy this classic work today. These selected paragraphs distill the contents and give you a quick look inside Memoirs Of A Midget:

After careful consideration, and after disguising the names of[Pg 14] certain persons and places to preclude every possibility of giving offence-even Mrs Percy Maudlen, for instance, if she ever scans these pages, may blush unrecognized!-I concluded that though I was under no absolute obligation to secure the publication of the Memoirs, this undoubtedly had been Miss M.s intention and wish.

...The serious-minded may none the less dismiss a midgets lucubrations as trifling; and no doubt-it could hardly be otherwise-a more practised taste than mine will discover many faults, crudities, and inconsistencies in them, though certain little prejudices on Miss M.s side may not be so easily detectable.

...Indeed, she herself assured me in the covering letter to which reference has been made, that a chance word of mine had been her actual incentive to composition-the remark, in fact, that the truth about even the least of things-e. g., your Self, Miss M.!-may be a taper in whose beam one may peep at the truth about everything.

...My mother, in her youth at Tunbridge Wells, had been considered a beauty, and had had many admirers-at least so Mrs Ballard, our cook, told Pollie: Yes, and we know who might have turned out different if things hadnt been the same, was a cryptic remark she once made which filled two little pitchers to overflowing.

...With myself pinnacled on his angular knee, and devouring like a sweetmeat every broken English word as it slipped from his tongue, he told me how pious an infant my Saint had been; how, when her mother, to beautify her, had twined flowers in her hair, she had pinned them to her skull; how she had rubbed quicklime on her fair cheeks to disenchant her lovers (ses prétendants), and how it was only veritable showers of roses from heaven that had at last persuaded Pope Clement to make her a saint.