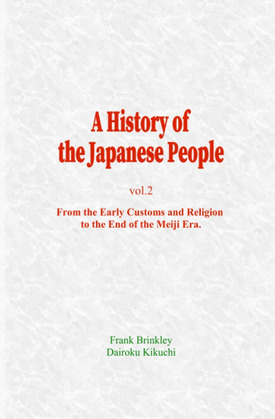 A History of the Japanese People (Vol.2)

A History of the Japanese People (Vol.2)

From the establishment of the Bakufu, Japanese art separated into two schools, that of Kamakura and that of Kyoto. The latter centered in the Imperial Court, the former in the Court of the Hojo. Taken originally from Chinese masters of the Sui and Tang dynasties, the Kyoto art ultimately developed into the Japanese national school, whereas the Kamakura art, borrowed from the academies of Sung and Yuan, became the favourite of the literary classes and preserved its Chinese traditions... If you wish to know really any people, it is necessary to have a thorough knowledge of their history, including their mythology, legends and folk-lore: customs, habits and traits of character, which to a superficial observer of a different nationality or race may seem odd and strange, sometimes even utterly subversive of ordinary ideas of morality, but which can be explained and will appear quite reasonable when they are traced back to their origin.