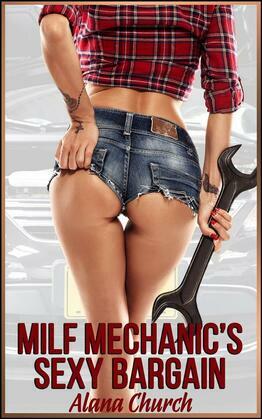 “Yes.” Her lightning smile flashed out. “But not for you. For me.”

“But Melody…” he stammered.

Her smile widened. “Bring her with next time, if you want. I don’t go lez very often, but I’ve got an open mind. Besides, she looks cute.”

His heart was pounding. “What? Are you kidding me?”

“Maybe, a little. But what I want from you has nothing to do with what you have with Melody,” she said firmly. “I’m not in love with you, though I think you’re a good young man. I don’t want to be your girlfriend, or go on dates with you, or get married to you and settle down with two-point-three kids and a cat named Snowball. I just want to screw.”

His mouth was desert-dry. “What if I say no?”

She shrugged. He fought to keep his eyes from straying to her chest, hidden by a loose t-shirt. “If you say no, you say no. You still owe me a couple of weeks’ worth of work. But nothing at the shop will change.” Her lips quirked. “I’m not going to turn into some screaming bitch just because you didn’t want to screw. You’re not the first man who’s told me no. And you probably won’t be the last.”

Somehow Corey found his voice, though it seemed hoarse and raspy in his ears. “They must be idiots, then.”

She grinned widely. “That definitely sounds like a yes.”

His groping hand found her grip. Her strong fingers returned it, at once reassuring and arousing. “Why me?”

“Corey.” Her voice brought him out of an incipient panic. “Don’t get all weird about this, all right? I know you’re young. But you’ll learn. Sometimes sex…is just sex. It doesn’t have to come with candles and fireworks and a bouquet of flowers. Sometimes it’s just a really, really fun way to spend an hour or two.”

“Maybe longer.” She opened the door, leaning to grin in through the opening. “Coming? Or are you going to wait out here?”

“I have to be out of my mind,” he repeated, but he smiled when he said it.