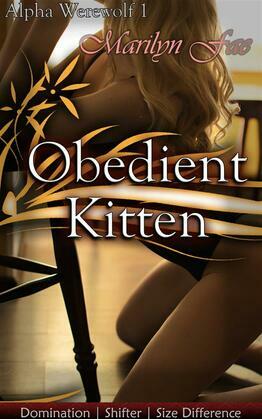 When Theodore's friend dies unexpectedly, he bequests him a house and everything in it. Everything includes a young cat shifter, the lawyer says, eyes gleaming with greed and envy. Cat shifters are a rare species in a world ruled by humans and werewolves. They are considered precious and protected, and a half-shift like her? Well, she is worth tens of millions in the black market.

She nuzzles up to him. Maybe he would play with her more, pet her and nuzzle her. She hopes wolves like cats. He smells nice, like pine and forest, not at all like Alex, who smells like tobacco even though he doesn't smoke. Not like Master Danny, who smells like medicine because he's sick.

He's strong enough that she doesn't worry at all about hurting him. He's strong and young and she doesn't have to worry about him dying and leaving her all alone.

She takes a chance, nuzzling up to his hand to get him to pet her. He's not very good at it, but she thinks he can be trained. She hopes he wouldn't keep her locked up in here like Master Danny. She hopes he would pet her all the time and keep her close to him. She relishes the sensation of his fingers combing through the strands of her hair between her ears, the soft scratches of his nails on the thicker fur at the base of her ears. She shifts under the touch, pressing against his hand and bowing her head to expose the back of her neck, chasing after the touch.

His rumbling purr is pleasing. She wants to hear more of it.

She's never met someone who's like her before. Sure, he doesn't have the ears or tail of tufts of fur all over her body like she does, but he's an animal nevertheless. She can smell wolf on him even though he's not shifted and he moves like a wolf too. He's strong. Powerful.

She knows he's being careful when he's touching her, putting just enough pressure on the back of her neck so that he's holding her still without digging his fingers in. It's grounding.

She's aware of Alex looking at her oddly and she sways her tail, deliberately tugging her skirt up. The scent of arousal from the boy makes her giggle but the man patting her head growls with displeasure.

She cowers a little, scared by the noise from the apex predator in the room. She's used to being the only dangerous thing in the room. Master Danny doesn't bring werewolves with him to visit her and he certainly doesn't let his friends close enough to touch. The stranger touching her is still pleasant though, even when he's growling dangerously.

She purrs at him, lazily thrusting her head to his hand so he can continue petting her. She likes being touched and he's a quick learner, scratching the bit behind her ears where it feels best and she moans happily, loving how it feels.

"You shouldn't tease unless you're willing to follow through, kitten," he warns dangerously, fingers curling around the base of her neck.

She blinks up at him, confused. He looks upset. No, not upset. He looks hungry and there aren't dollar signs in his eyes. "Master Teddy?" she whispers, frowning. Oh. There's a heady scent of arousal coming from him as well, she realizes after a second. Oh! Does he want to mate? She'd like that very much. Her purr intensifies, rumbling through her vocal chords as she leans closer towards him, tail perked up to show off her bottom as she crawls closer towards him.

She doesn't really like clothes. The only reason why she wears them is because she didn't like the way the other men looked at her. This is her new Master, though. And he smells very nice. She wants to rub herself all over him and put his scent on her skin. "Mate, Master Teddy?" she asks.