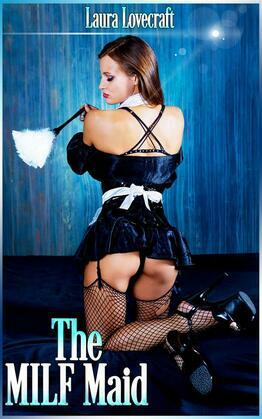 After being fired for seducing the son of a client, Beth is desperate to find a job. When a friend offers her a position at The Alpha, a hotel for wealthy guests who at times expect their scantily clad maids to do more than just clean. Beth reluctantly agrees, insisting she'll do nothing more than dress sexy and put on a little show as she cleans.

The job doesn't start well when Beth is talked into degrading herself for a large sum of money, then humiliated by the guest for doing it. Ready to quit, Beth then encounters Benny, a hot young man alone in his room while his father is at a conference. It seems Benny has a thing for older women, and Beth soon discovers that as good as the hotel pays, the Benefits are even better.

“You want me to have sex with your son?”

“Yes,” he answered with no hesitation.

“I like young men, but the key word being man.”

“He’s never had sex with anything other than his hand.” Beth pointed out. “I don’t want to be his first, it wouldn’t be right. He’ll never see me again.”

“That’s what I want. Just sex, down the line he’ll find someone to care about, but for now he needs to get over being shy and gain some confidence.”

“You cleaned his room, right? The tissues, the lube?” Without waiting for an answer, he went on. “I was his age and remember the days the sheet rubbing on me could get me going. But Benny is past that, he’s a chronic masturbater.”

“I can’t believe in a hotel full of sex workers posing as maids, I’d find the one who would say no.”

“Alright,” he nodded. “It’s too bad, you’d really be helping him out for when he goes off to school. Young girls can be cruel, they find out he’s a virgin he’ll get teased and might embarrass himself during his first time, maybe freeze up and not be able to do it.”

“Guess you’ll have to hope for the best.”

“Then it’s all over the school and social media and he already has confidence issues with girls. That would be devastating, and he’s such a good kid.” He sighed. “But I guess you’re right, its sleazy and a lot to ask someone to do.”

“Understood.” He extended his hand to her. “Nice meeting you, Beth.”

She took his hand, and he pressed something into her palm.

“No,” she said when she looked down and saw a room key with several hundred-dollar bills folded around it. “I can’t take this.”

“The money is yours to keep,” he backed away with his hands up. “Whether you earn it or consider it compensation for my wife’s rude behavior, is up to you.”

He put his back to her and walked away. Beth looked back at the roll of hundreds in her hand. There had to be at least a thousand dollars.

“Maybe its best if you don’t.” he had reached the elevator and was stepping into it. “After all,” he spoke as the door began to close between them. “Just think how pissed his mother would be.”