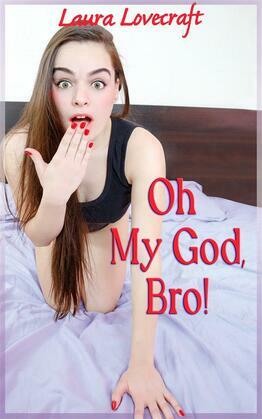 Tammy will do anything for her little brother Jimmy. But when he's the victim of a cruel prank where someone slipped Viagra into his drink, she reminds him she's his sister and there's nothing she can do for him. But when he insists and Tammy sees just how big his problem is, she takes one for the team and does what she can to help him out. After all, that's what big sisters are for, right?

"They call this hotdogging." Jimmy slid it between her cheeks.

"Of course, you'd know that." Tammy said into the pillow, she couldn't believe she was doing this."

"Stop talking." She released a long breath. "I was hoping I'd have a naked guy behind me tonight, but wow, did that take a wrong turn."

"Sorry," Jimmy wheezed. "You think I wanted the first girl's butt I touched to be my sisters?"

"Stop the woe is me crap, and come, okay?" Said any of her friends to their brothers, never.

"Yeah," Jimmy pumped harder, the bed rocking from his efforts.

Jimmy moaned, his fingers tightening to the point it hurt, but she didn't want to stop him.  His thighs trembled against her legs as he sped up. Where did he think he was finishing? This was bad enough, she didn't need a mess on her, or her nightshirt.

But he seemed to be right there, so she was just going to have to deal with an additional layer of shame when it was over.

The poor kid was begging to finish, and she felt her annoyance giving way to pity. She'd been thinking of herself and how wrong this was. She hadn't considered what he'd said to her a minute ago, that this had to have him feeling low, asking your sister to help, and knowing she was doing it reluctantly.

Tammy sat up, pushing her shirt back down over her sticky butt. "Relax, maybe you're trying too hard."

She turned to see him sitting on the edge of the bed, his back to her with his head in his hands.

"It's not going to happen. I know it sounds bad, but that was the hottest thing I've ever done. I was close, but I'm too tired."

"Take a couple minutes, catch your breath." Tammy shifted so she was behind him and put her hand on his shoulder. "I'll let you try again."

His shoulders slumped beneath her touch. "We made a deal, and this didn't work. Will you take me to the ER? I don't want to go alone."

Tammy's heart broke at the dejection and fear in his voice.

"No, we're going to take care of this, I promise."

"No offense, sis, but I don't think that was enough and we can't do more than that."

"Maybe we can," Tammy spoke slowly, wondering if she could go through with what she was thinking.

"I'm going to stand up and put my underwear back on. You might want to look away."

He rose from the bed, and Tammy turned her head. When she did, she was confronted with their reflection. Her kneeling on the bed, and Jimmy, naked looking on the floor for his underwear. Tammy gasped;