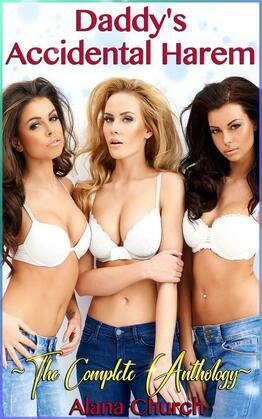 "Shawna," I whispered in the dressing room a few minutes later. "I can't wear this!"

My best friend adjusted a stocking, looking at me over her shoulder. "Why not?"

She shook her head, her dark hair waving. "Of course it's ridiculous. But it's also perfect. Daddy has a...thing...about schoolgirls."

"Sounds like he has a lot of...things," I muttered under my breath.

"From what I can tell, you're giving him more than a taste."

"Only when he wants me to," she replied cheerfully. "But he likes screwing more than he likes getting a beej. Which is cool. Because I don't think giving head is all that much fun."

Shawna stopped halfway through putting her jeans back on. "How would you do that?"

"I don't know. Shove it down your throat?"

"You could try. But I got mad deep-throating skills. Even though I don't use them that often."

I shook my head, carefully folding the outfit. Or trying to, at least, since I could have probably put the whole thing in a plastic baggie. "So do we have a plan?"

"I think so. You come over to my place after you get done at school on Wednesday. We'll hang out. And when it's time for Daddy to come home..." She trailed off suggestively, her lips curled in a happy smile. "Oh, Ari, I hope this works!" In one of her mercurial changes of mood, she gave me a hug, almost dancing in her excitement. "It would be awesome if we could pull this off."

"Does everything fit?" the older woman asked with a professional smile. If she noticed my hasty correction, she gave no indication.

I flushed, which was silly. "Do you think it's maybe...a little too much?"