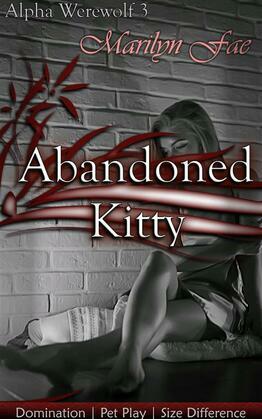 When Anna loses her Master, she panics and shifts into her cat form, hiding in her animal mind because she doesn't have to deal with grief if she's a cat. Except nobody tells the werewolf who had been tasked with taking care of her that she's not actually a cat. It's not too bad, living with the Werewolf, except she's human too and has other needs that can't be ignored.

She is mostly asleep when she hears a familiar voice at the door that follows a confused Shadow. The old woman marches in with all the wrath of an avenging god. Or in this case, a pissed off caretaker. Master Monty's primary caregiver is a terrifying woman and keeps order around the house with an iron fist.

She must have been so sad when she came back from her son's graduation and found out that Master Monty had died in her absence.

"Melissa? What're you doing here?" Shadow sounds uncertain for the first time since she's been here. "How did you get in?" he continues, completely flummoxed.

"The staff tell me that you took Anna with you," Melissa says and her ears perk up at the sound of her name. "Where is she?" Louder, she calls out, "Anna? Anna, darling. Where are you?"

Melissa has a sweet spot for her. The older woman practically raised her. She's neither wolf nor cat. Her animal is a bear and she sorts of looks like one, though Anna was never brave enough to say it to her face. Melissa is as big as one, tall and broad with fat and muscle in equal parts and talks with an undertone of 'I can break your bones with my bare hands' that makes the animal side of her tremble and want to hide far, far away. But Melissa has always been kind to her.

"It was in the will. She's important to the old man, I gather?" Shadow is attempting to make himself sound less surprised by the unexpected visit and get a hold of himself, but Anna can hear his heartbeat and he is a little scared. She wonders if Melissa raised him too.

"Where is she?" Melissa doesn't wait for an answer, sniffing the air and following her nose until she is looking down at Anna, curled up inside of her little cage.

"Mreowl," she whines up at the older woman, who lets out an outraged roar that echoes through the room and makes the walls vibrate. She wonders if the walls would crumble from the sheer power in her roar, but they only shake a little, holding firm.

Anna has never seen Melissa shift before. She bends over and grabs her cage by the sides and breaks it apart like it's made of paper. It shatters, the fragments falling into her eyes. She closes her eyes and curls her tail around herself.

"What're you doing, Melissa?!" Shadow is behind her.

Melissa ignores him and shrinks back into her form. "Darling, how long have you been in there?" she asks, her voice softer than Anna has ever heard her before. "Come here, darling. You poor thing. Come here."

She mewls and stumbles into Melissa's open arms, shifting as she unfurls from her little corner and she hears Shadow's sharp intake of breath. He backs away, eyes wide with shock.

"I didn't know- I didn't know she's-" he starts but Melissa's rumbling purr drowns away whatever else he has to say.

Anna hides her face in the larger woman's chest, finding comfort in her warmth. She feels safe here. Her arms and legs ache from being shifted for so long and it is nice to have fingers and toes again.