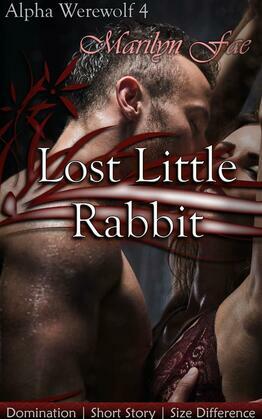 Ally is pretty sure she's going to die. She should never have wandered away from her friend. Now, werewolves have taken interest in her and are hunting her down in broad daylight. She's a weak - and probably delicious - rabbit, so it's only a matter of time before they catch her. There are only so many places she can hide in the city.

"Hello there." The man looms in front of her, huge and terrifying. "What's a little thing like you doing out here all alone? Don't you know it's not safe for shifters like you out here?"

"I um- I'm just here for the event," she stutters. "If you could point me in the direction of my hotel, that would be very helpful," she says, hoping her ears are properly tucked under her hair and they can't see them. Apparently city folks are weird about Shifters like her, which was why Darnell had been so wary about letting her out of the hotel.

"Aren't you sweet?" The man sneers, looming in front of her, closing in and grabbing her wrist hard enough to hurt.

"Please let go," she says, her heartbeat going too fast. "I- Please," she whimpers, eyes filling with tears. She can hold onto her shift easier now that she's older, but she's fast forgetting how to keep in control because she's really scared right now.

"Why would I do that? Sweet little thing like you," he drawls, leaning in and licking a wet strip up her cheek.

It's really gross and she pulls away, cheeks going bright red with humiliation. The other werewolves are closing in now too, trapping her between them to give her the feeling of prey being surrounded. It's terrifying. Her breath hitches and her eyes burn with tears. She wipes away the saliva on her cheek with the back of her hand. She doesn't like the way he smells like cigarette smoke.

He yanks her close, pulling their bodies closer together and then he shifts partially so that his fingers turn into sharp claws right in front of her eyes. She thinks of hitting him and running away but she's outnumbered. She closes her eyes and grimaces when she feels him comb through her hair, tips of his claws cutting through her hair band like it's made of paper. Her hair tumbles out from the ponytail and her rabbit ears drop down. A whine escapes her throat. Her ears fold back, and she trembles quietly, panicking.

She closes her eyes, heart beating so hard she's afraid it would break through her rib cage and abandon her.

"Aren't you just lovely," he grins and she can feel his breath on her cheek, burning hot and smelling like cigarette smoke and danger. Her ears are folded all the way back pressing into her ear so his words have a sort of echo to them.

She yelps when he clutches her long ears in his palm and tugs her head back, exposing her bare neck to him and looking at her like he's trying to find the best place to slit her neck. It hurts to have her ears tugged like this.

"You're going to catch a high price at the market. But maybe we can play with you a little before we send you there," he says, his voice dropping low. He leans in close, mouth parted a little bit like he's going to kiss her and the idea of his lips on hers makes her blood run cold.

Her breath hitches and she loses control of her shift entirely. It happens between one breath and the next, her body shrinking so rapidly that his hold on her ears loosen enough for her to drop straight down onto the pavement. She runs, leaving behind her favorite dress and what little spare change she has in her pockets.