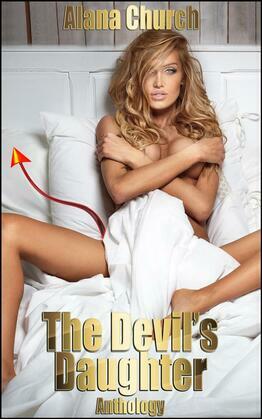 When Morgan got out of the car, it was all John could do to keep his mouth from falling open in astonishment. Pictures on Facebook didn’t do justice to the incredible transformation that had come over his cousin’s body in the last eighteen months. She had been a tall, long-limbed teenager, all arms and legs, with small, high breasts. Now, her figure was astonishingly lush.

Her legs were long and tan, dark-skinned like the rest of her. John knew his father was always trying to get some hint about his cousin’s parentage, dropping clumsy inquiries into the conversation until Aunt Moria was boiling and his mother had to change the subject, but he had always seen Morgan as a study in contradictions. Nothing about her body really made sense. Her red hair, dark as campfire embers on a winter night, and her bright green eyes spoke to an Irish or Scottish heritage. But that was belied by skin dark enough to be Latina or even Indian. And her eyes were slightly tilted, like a cat’s, and seemed to tell a tale of oriental blood in her family tree.

Jesus, he thought, watching her approach. Dad’s going to have a stroke.

She wore shorts that were so brief they could almost be mistaken for bikini bottoms, white strands of thread clinging to her tan thighs. Her feet were in sandals, and above, she wore a t-shirt, blindingly white against her dark skin, and so tight that it looked as if it had been painted on. It came to a stop just below her ribcage, and allowed a careful observer to see her navel was pierced, a glittering green emerald hovering above the dimple in her skin. Her nose was pierced too, with a tiny diamond stud just above one nostril. Small black letters were stenciled on her shirt, and John leaned close to read them.

‘If you’re close enough to read this, you better have bought me dinner.’

He laughed. One thing that hadn’t changed was his cousin’s sense of humor. As risqué as her mother’s, and as certain to drive his father nuts. A large part of him looked forward to the upcoming clash of wills.

“John!” He was caught in a crushing hug, and he guiltily enjoyed the press of his cousin’s firm breasts against his chest. But only for a moment. The maddening itch in his crotch intensified, and he quickly backed away, not wanting to embarrass himself.

His cousin gave him an odd look from beneath her lids, but released him. Turning, she smiled happily at the rest of the family. Jasmine, he noted with some amusement, was standing warily, her arms crossed over her chest, which was noticeably smaller than Morgan’s.

His cousin laughed, her white teeth shining. “Hi, Aunt Carol. Yup. The Boobie Fairy came and paid me a visit.” She looked down at her chest proudly. “And now I have to lug these melons around. But the boys seem to like them.”

His sister gave an unwilling snicker. “Looks like he came twice. One for each boob.”

“Jasmine!” Their father’s voice was scandalized, but Morgan and Moira just laughed.

“Hi, Uncle Frank!” She bounced over and gave him a hug. When she let go, his father’s face had softened considerably. It was hard to really get mad with Morgan. She sailed through life with a sunny, cheerful outlook that was nearly impossible to resist.