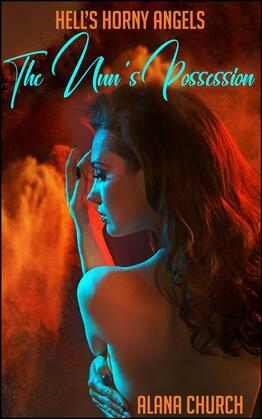 Lorelei is a demon, a punisher of the damned. But one fateful day she is able to escape from Hell.

If she still had her physical form, Lorelei would be rubbing her hands together in glee.

True, the tall, gawky youth in front of Kathleen was not at all the sort of man she would have chosen for her first sexual encounter in thousands of years. But beggars could hardly be choosers, after all.

Who cares? She guided Kathleen's hands to the ridiculous fastenings of Nick's trousers, teasing the young man with a brush of fingers against his eager manhood. Mortal, angel, or demon, males were all alike. If you were smart enough, you could lead them around by their manhood, and they would be none the wiser for it.

With fingers that had learned how to navigate Kathleen's clothing over the last few days, she undid the buckle of the leather belt, then the button which held Nick's trousers up. A push, a whisper of falling cloth, and the young man was nude from waist to knee.

He swallowed, looking down at her nervously. "Is it..."

"It's beautiful." And Lorelei couldn't help but wonder if it was her voice whispering in wonder and awe, or Kathleen's. She reached out with her host's body, feeling the hot skin, tight-stretched over the throbbing, pulsing length of Nick's erection. If her heart had anything left in it but ashes and dust, she might have wept at the sheer, human, ordinariness of him.

~So long,~ she whimpered. It had been so long. When she, along with the rest of the rebellious angels, had been cast out of Heaven, the Almighty had cursed the male demons with a foul ugliness that was could drive a human to madness.

Which was why Lorelei had no need or desire for a sexual superman. She had lived for generations with a hideous reality that would make most humans run screaming in horror. Anything, even this untested youth, would be so much better that there was literally no comparison between the two.

~Lift up your sweater,~ she urged Kathleen. ~Show him our body.~

A hint of coolness as the soft cloth was pushed upward, a balm on her pain-ravaged senses. Nick's eyes went wide, and Lorelei stifled a hint of triumph It wasn't her body, after all. Not yet. But it was still a good one. One to be proud of. The tips of her breasts were tingling, almost aching in their need to be touched.

She moved Kathleen's fingers faster, watching Nick's face go slack with pleasure. She could do it. Make him climax, bind him to the two of them. But she wanted more. Needed more.

"What can I do for you?" Nick asked, his eyes worshipful.

"You can love me." Lorelei took Nick's hands and put them on her breasts. "I have waited too long. I am tired of waiting. I want to know what it's like to be with a human. A man," she corrected quickly, hoping Nick wouldn't catch the slip.