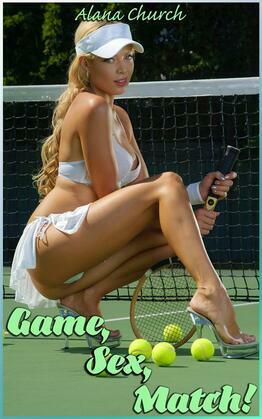 Ben was just trying to lose some weight. But tennis lessons with the club pro take a hot and sexy turn when the older woman recruits him for a grudge match against her long-time nemesis! Will victory on the court turn into a lusty romp between the sheets? Ingrid might be more than Ben can handle, but he is willing to try!

"Are you insane?" Ben asked. "I don't have five thousand dollars, and even if I did, I wouldn't be spending it on a stupid bet on a tennis match!"

"Twenty-five hundred," Amanda replied absently. "That's what your half would be. But don't worry," she said. "I'll cover your half."

"I don't know why you roped me into this in the first place."

Ingrid was tempted to point out that it had been Amanda, not her, who had brought Ben into the affair. But she doubted that would count for much. And besides, it was her own fault for losing her temper with the nasty little bitch.

"Don't worry about it," she said. "Amanda's mouth has finally written a check her talent can't cash. I'm going to enjoy whipping her tail."

Ingrid blinked, staring, then hurried after him. "Ben, wait! I need you! You can't just...bail on me like this!"

He turned, arms crossed. "Why not? I'm definitely not in your league." He waved at the small figure of Amanda in the distance. "I'm not in her league, either, if she thinks she can beat you. I'm probably not even in her husband's league. All I'm going to do is embarrass myself and cost you a lot of money."

"You don't need to be in his league. Or her league. Or my league." It suddenly occurred to Ingrid that Ben had never seen her demonstrate her skill on the court. "Here. Give me a ball."

He handed one over. "Now," she said, bouncing it a couple of times. "Watch."

She tossed it up in the air. Rising on her toes, her arm swept back, then violently forward.

As if it had been shot out of a cannon, the ball screamed across the net and hit the practice wall with a thud that resounded around the court.

"Jesus." Ben licked his lips. "How fast was that?"

"About one hundred." She shrugged against an ache in her shoulder. "I'm out of practice. Back when I was on tour, I could get it up to about one-fifteen."

She reached up and patted his cheek. "All you have to do is stay on your half of the court and return their serves. I'll take care of the rest."

Ben looked down at his shoes. "I'm not sure if I can."

"You want some motivation?" she asked impatiently. "Twenty-five hundred bucks not good enough for you? Fine. If we win, I'll let you screw me."

"Oh, stop it. You think I haven't seen you staring at my legs and my chest?" Ingrid tilted her head and smiled. "And stop acting so weird. Sometimes a girl likes it when a fellow lets her know she still looks good."

"You look more than good," he muttered. "You're gorgeous."

"Well, let's give you a little taste of what you'll be getting," she smiled. "After all, I can't expect you to go in on faith alone."

"You don't have to..." he started, as she came up next to him. But whatever he might have said next was cut off as she snuck her hand down his heavy gray cargo shorts. "What are you doing?"