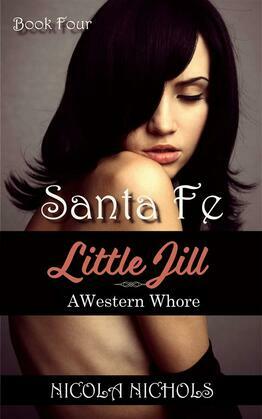 In Santa Fe, Jake starts Jill whoring for businessmen at the hotel and putting on a sex show with Lis at a cathouse. Socialite Gina wants Jill and Lis to satisfy the secret lusts of politicians; she wants the leverage favors and secrets provide.

But the boom is fading.

Warren asks her to seduce a man to steal information. The world is changing but Little Jill remains a western whore.

As the stage rolled down the dusty streets of Santa Fe, my first look at the city made my heart sink a little. The Spanish architecture was lovely, but the city looked disappointingly sleepy. The streets were dirt and a few prosperous looking businesses lining them were mixed in with hovels and shabby bodegas.

Santa Fe was supposed to be a city, and after all the bright things Jake and Lis had told me about the city, I'd let myself expect far too much. I'd expected Santa Fe to be more like the cities I'd seen back east. Thinking of coming here to work with my friends, knowing they were special and were boosters of this city, made me assume the place would have an elegance.

The truth was, Santa Fe was an important crossroad, but otherwise just another western town. On top of that, all three of us felt a little lightheaded as the stage pulled in. The driver had warned us that this city was at high altitude. "Higher than Denver," he said. "Over seven thousand feet."

Carmen and Maria, the Mexican girls who had decided to move to Santa Fe with me, were delighted with what they saw. As we passed a fancy saloon, Carmen leaned out and took a good look. "Nice place," she said. "I already like this place more than Wolf Crossing."

I saw her point. This saloon was a giant step up from the saloons in both places, and there were more potential clients, people of means walking the streets. The three of us were whores, so that mattered. Nicer places to meet clients and more clients who were more than ranch hands.

"This is too delicious!" Those were Jake's welcoming words when he saw us getting off the stage. His voice sounded sweet to my ears.

His eyes smiled when I made the introductions. "A sister act?" he said, sounding hopeful.

I nodded. "Separate or together, they are ready to go."

That made his eyes sparkle, and he wasn't the only one happy with the introductions.

Carmen, wide-eyed, brushed her body up against Jake and looked up at his shoulder-length hair. "You didn't tell us how good looking your friend Jake is," she said.

I laughed. "Of course not. If I'd told you that, you'd have been screaming at the driver to go faster for the whole trip."

"Jill said you have work for us," Maria said. "Good pay for hot fucking?"

Jake and his wife Lis were in the same line of work we were in, but they had an actual businessoffering high-end sexual entertainments for a select and wealthy clientele. They'd been returning to Santa Fe when I was first headed west. We met on the stage and hit it off. I'd worked with them, in various towns. They'd wanted me to join them, but I had to finish some business in Lizard Creek. With that taken care of, I'd wired them to let them know I was on my way and bringing my friends to be coworkers.