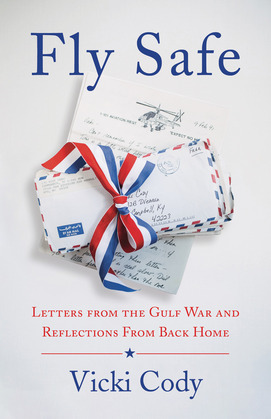 It is August 1990, and Iraq has just invaded Kuwait, setting off a chain reaction of events leading up to the first Gulf War. Vicki Cody’s husband, the commander of an elite Apache helicopter battalion, is deployed to Saudi Arabia—and for the next nine months they have to rely on written letters in order to stay connected.

From Vicki’s narrative and journal entries, the reader gets a very realistic glimpse of what it is like for the spouses and families back home during a war, in particular what it was like at a time when most people did not own a personal computer and there was no Internet—no iPhones, no texting, no tweeting, no Facetime. Her writing also illuminates the roller coaster of stress, loneliness, sleepless nights, humor, joys, and, eventually, resilience, that make up her life while her husband is away. Meanwhile, Dick’s letters to her give the reader a front row seat to the unfolding of history, the adrenaline rush of flying helicopters in combat, his commitment to his country, and his devotion to his family back home. Together, these three components weave a clear, insightful, and intimate story of love and its power to sustain us.