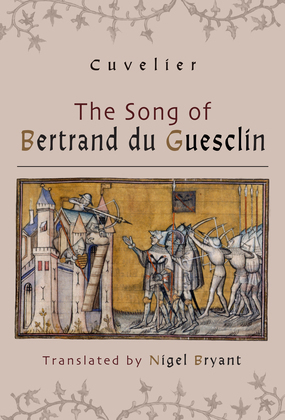 The Song of Bertrand du Guesclin

by Cuvelier (Author), Nigel Bryant (Translator)
Buy for $24.95 Excerpt
Nonfiction History Medieval
warning_amber
One or more licenses for this book have been acquired by your organisation details

Bertrand du Guesclin is one of the great French heroes of the Hundred Years War, his story every bit as remarkable as Joan of Arc's. The son of a minor Breton noble, he rose in the 1360s and '70s to become the Constable of France- a supreme military position, outranking even the princes of the blood royal. Through campaigns ranging from Brittany to Castile he achieved not only fame as a pre-eminent leader of Charles V's armies, but a dukedom in Spain, burial among the kings of France in the royal basilica at Saint-Denis, and recognition as nothing less than the "Tenth Worthy", being ranked alongside the nine paragons of chivalry who included Alexander the Great, Julius Caesar, Charlemagne and King Arthur.
His is a truly spectacular story. And the image of Bertrand, and many of the key events in his extraordinary life, are essentially derived from The Song of Bertrand du Guesclin, this epic poem by Cuvelier. Written in the verse-form and manner of a chanson de geste, it is the very last of the Old French epics and an outstanding example of the roman chevaleresque. It is a fascinating and major primary source forhistorians of chivalry and of a critical period in the Hundred Years War. This is its first translation into English.
Cuvelier is a fine storyteller: his depictions of battle and siege are vivid and thrilling, offering invaluable insights into medieval warfare. And he is a compelling propagandist, seeking through his story of Bertrand to restore the prestige of French chivalry after the disastrous defeat at Poitiers and the chaos that followed, andseeking, too, to inspire devotion to the kingdom of France and to the fleur-de-lis.

NIGEL BRYANT is well known for his lively and accurate versions of medieval French authors. His translations of Chrétien de Troyes' Perceval and all its continuations and of the extraordinary late Arthurian romance Perceforest have been major achievements; he has also translated Jean le Bel's history of the early stages of the Hundred Years War, and the biography of William Marshal.