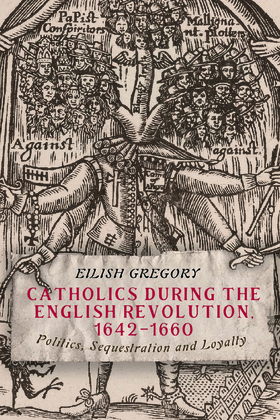 Catholics during the English Revolution, 1642-1660

This is the first book to examine thoroughly the ways in which Catholics adapted to political and social change during the turbulent years of the English Revolution. The book examines several important aspects of the Catholic experience in this period. It explores the penal laws by which the estates of Catholics were sequestrated, discussing the extent to which politicians designed the new laws to target Catholics specifically, rather than Royalists more generally, and outlining how the sequestration legislation operated in practice. It considers how Catholic gentry utilised their networks with influential Protestants with wider political connections when applying to have their sequestrations discharged. More broadly the book reveals how Catholics demonstrated their loyalty and assimilated into society despite being viewed as the natural enemies of the English Republic and Protectorate. The book also compares Catholic experiences to those of other religious minorities and sets the situation in England in the wider European international context of Catholic-Protestant rivalry and warfare, which made Catholics a particularly vulnerable religious minority in Puritan England. Eilish Gregory is a Postdoctoral Research Associate at the Royal Historical Society. She has held research fellowships at the Folger Shakespeare Library, Durham University and Marsh's Library and teaches at the University of Reading.