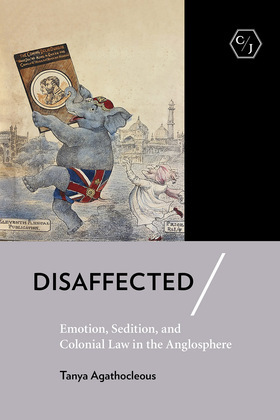 Disaffected examines the effects of antisedition law on the overlapping public spheres of India and Britain under empire. After 1857, the British government began censoring the press in India, culminating in 1870 with the passage of Section 124a, a law that used the term "disaffection" to target the emotional tenor of writing deemed threatening to imperial rule. As a result, Tanya Agathocleous shows, Indian journalists adopted modes of writing that appeared to mimic properly British styles of prose even as they wrote against empire.

Agathocleous argues that Section 124a, which is still used to quell political dissent in present-day India, both irrevocably shaped conversations and critiques in the colonial public sphere and continues to influence anticolonialism and postcolonial relationships between the state and the public. Disaffected draws out the coercive and emotional subtexts of law, literature, and cultural relationships, demonstrating how the criminalization of political alienation and dissent has shaped literary form and the political imagination.