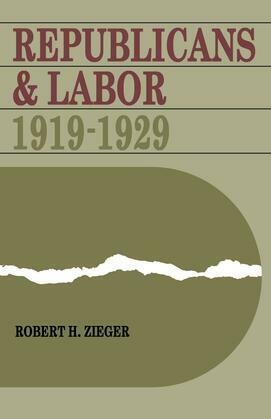 At no other time in American history had labor unrest been more evident than the period immediately after World War I. Robert H. Zeiger here recounts the labor problems that faced the Republican administrations of Presidents Harding and Coolidge—massive strikes, antiracial hysteria, and the hardening of class attitudes throughout the nation— and describes the programs and policies of Republican leaders—particularly those of Herbert Hoover—to solve them. Zeiger finds that while suspicion and animosity between the Republicans and the union leaders persisted, the rising prosperity of the nation, together with the adroit efforts of Hoover and his associates, tended to lessen the influence of extremists in both groups. Labor reached an accommodation of sorts with the Coolidge administration; and when, in 1928, Hoover defeated Al Smith, the substantial labor vote he received was among the factors that lent stature to his victory.