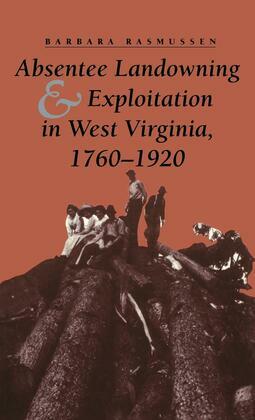 Absentee landowning has long been tied to economic distress in Appalachia. In this important revisionist study, Barbara Rasmussen examines the nature of landownership in five counties of West Virginia and its effects upon the counties' economic and social development.

Rasmussen untangles a web of outside domination of the region that commenced before the American Revolution, creating a legacy of hardship that continues to plague Appalachia today. The owners and exploiters of the region have included Lord Fairfax, George Washington, and, most recently, the U.S. Forest Service.

The overarching concern of these absentee landowners has been to control the land, the politics, the government, and the resources of the fabulously rich Appalachian Mountains. Their early and relentless domination of politics assured a land tax system that still favors absentee landholders and simultaneously impoverishes the state.

Class differences, a capitalistic outlook, and an ethic of growth and development pervaded western Virginia from earliest settlement. Residents, however, were quickly outspent by wealthier, more powerful outsiders. Insecurity in landownership, Rasmussen demonstrates, is the most significant difference between early mountain farmers and early American farmers everywhere.