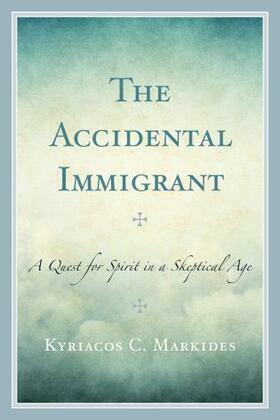 The Accidental Immigrant is the capstone work of world-renown author Professor Kyriacos C. Markides, based on his over fifty-year-quest for an authentic understanding of the true nature of Reality. As a teenager he arrived at the docs of New York in 1960 with the purported aim of earning a business degree and returning to his native Cyprus. Thanks to a string of uncanny coincidences he soon realized that the real meaning and purpose of his Atlantic crossing was not the acquisition of practical skills but the development of his social awareness and spiritual consciousness. This is the story, among other things, of his valiant struggles to assimilate within American society and culture, of his peace activism to help heal the wounds of ethnic strife in his native Island, and of his relentless quest for spiritual fulfillment within the challenging confines of the secular and agnostic world of modern academia. As a sociologist and a field researcher he shares with us his encounters with a variety of remarkable people that include colorful Christian shamans and healers possessors of paranormal gifts as well as charismatic monks and ascetics who exposed him to the magnificent spiritual wisdom of Eastern mystical Christianity. It is, among other things, these kinds of experiences that step by step led him to realize that there is a deeper Truth over and beyond our physical and sensate universe that is the foundation and wellspring of everything that happens in our lives within the three-dimensional world. And it is this awareness that could eventually lead towards the integration of the best of science with the best of religion for the long-term survival of the human race.