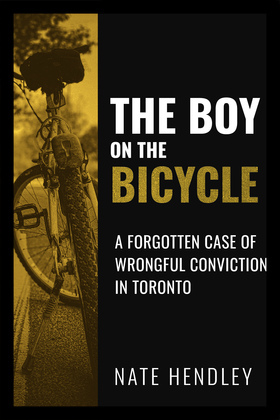 The Boy on the Bicycle

On the night of September 15, 1956, a seven-year-old child was murdered on the deserted grounds of the Canadian National Exhibition (CNE) in Toronto. The main suspect was a teenage boy seen near the crime scene on a bicycle.

Toronto police arrested Ron Moffatt, a fourteen-year-old former CNE employee who vaguely fit the description of the suspect. During a tough interrogation, Ron falsely confessed and was convicted at trial.

In truth, Ron couldn’t ride a bicycle and was innocent; his phony admission was the product of fear and pressure tactics. The real culprit — sex offender and serial killer Peter Woodcock — remained at large, preying on new victims.

This shocking story has eerie parallels to the Steven Truscott case (which also involved a fourteen-year-old Ontario boy accused of murder) but has been largely forgotten until now.

A powerful account about a coerced confession, a fumbled police investigation and the crusading lawyer who fought to free Ron from custody.