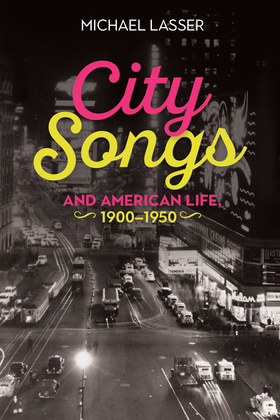 Nothing defines the songs of the Great American Songbook more centrally than their urban sensibility. During the first half of the twentieth century, songwriters such as Harold Arlen, Irving Berlin, Dorothy Fields, George and IraGershwin, and Thomas "Fats" Waller flourished in New York City, the home of Tin Pan Alley, Broadway, and Harlem. Through their songs, these artists described America -- not its geography or politics, but its heart -- to Americansand to the world at large.

In City Songs and American Life, 1900-1950, renowned author and broadcaster Michael Lasser offers an evocative and probing account of the popular songs -- including some written originally for the stage or screen -- that America heard, sang, and danced to during the turbulent first half of the twentieth century. Many songs portrayed the glamor of Broadway or the energy and Jazz Age culture of Harlem. But a city-bred spirit -- or even a specifically New York City way of feeling and talking -- also infused other widely known and loved songs, stretching from the early decades of the century to the Twenties (the age of the flapper, bathtub gin, and women's right to vote), the Great Depression, and, finally, World War II.

Lasser's deftly written book demonstrates how the soul of city life -- as echoed in the nation's songs -- developed and changed in tandemwith economic, social, and political currents in America as a whole.

Michael Lasser, a former teacher and theater critic, is host of the syndicated public-radio show Fascinatin' Rhythm (winner of the Peabody Award) and the author of two previous books.

Support for this publication was provided by the Howard Hanson Institute for American Music at the Eastman School of Music at the University of Rochester.