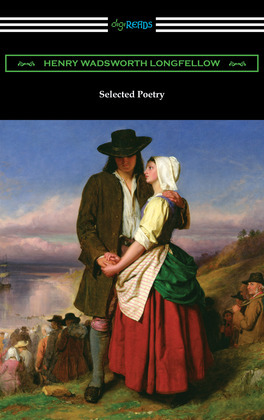 As a member of the Fireside Poets, a group of five nineteenth century American poets whose work elevated American poetry to a status equal to if not surpassing that of the English poets, Henry Wadsworth Longfellow wrote some of the most famous poems in American literature. Included in this collection are many of his most well-loved poems, such as the iconic ?Paul Revere?s Ride?, which relates the famous night time ride of Paul Revere to warn his compatriots of a British attack. ?The Song of Hiawatha? is an epic and tragic tale of the Ojibwe warrior and his love for Minnehaha, a woman from the Dakota tribe. ?Evangeline?, arguably his most famous work, is the heartbreaking story of an Acadian girl who searches for her lost love Gabriel during the time of the Great Upheaval, which was the forced expulsion of native Acadian peoples by the British from areas of present-day Nova Scotia. Longfellow?s poetry is notable for its lyricism and deals extensively with stories of mythology and legend. As arguably the most famous American poet of his time, Longfellow?s writings afforded him great success and established a legacy that endures to this day. This edition includes a biographical afterword.