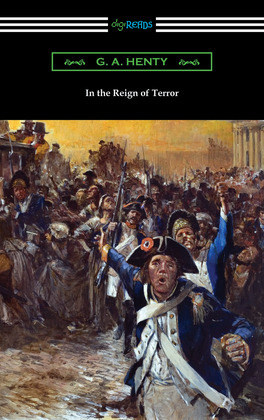 In the Reign of Terror

?In the Reign of Terror? is one of the most popular and enduring tales by British author G. A. Henty, who wrote over one hundred historical tales of adventure and bravery. First published in 1888, the central character is Harry Sandwith, a sixteen-year-old boy who is sent from his school in Westminster by his family to live with the Marquis de St. Caux and his family at their chateau in France. Harry?s father, who once served under the Marquis, wishes his own sons to have the influence and friendship of a properly educated and independent British boy. Harry arrives in France in 1790 and grows close to the Marquis and his children when he proves himself to be brave and resourceful. Soon the growing unrest and danger of the French Revolution reaches Harry and his surrogate family, as the Marquis? sons attempt to flee to England and Harry and the three daughters hide in Paris. Harry proves his courage and loyalty over and over again as he rescues his aristocratic friends from imprisonment and execution at the hands of angry mobs. Readers young and old alike will enjoy this timeless and heroic tale of bravery and friendship. This edition includes a biographical afterword.