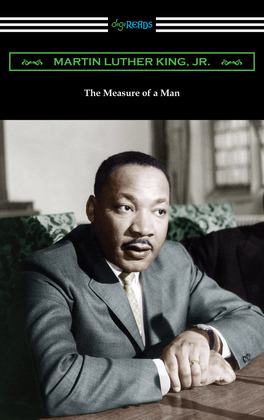 The Measure of a Man

First published in 1959, ?The Measure of a Man? is a collection of two influential sermons given by Martin Luther King, Jr. at the first National Conference on Christian Education of the United Church of Christ at Purdue University in August 1958. The two sermons, ?What is Man?? and ?The Dimensions of a Complete Life?, were printed together and published as ?The Measure of a Man? by the Christian Education Press with the consent of King the following year. These sermons reflect ideas that King first began to develop during his days in the seminary and address what King believed to be ?one of the most important questions confronting any generation?. He argued that the answer to what precisely made us human and different from other animals was complicated as we are biological beings, but also beings of spirit and thought. King argued that while we are made in the image of God and thus have a connection to the divine and perfect, we are also sinners in need of divine grace from God, our Creator. King?s sermons are as thought-provoking and inspiring now as when he gave them and remain an important addition to his body of work.