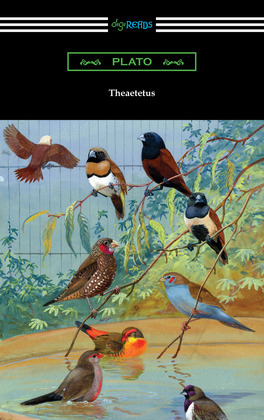 ?Theaetetus? is a dialogue by Plato from his middle period, written sometime around 369 BC. It is widely considered to be one of his best works and remains a significant contribution to the philosophy of knowledge. The work is framed as a dialogue between Socrates and a promising, but humble, young geometry student named Theaetetus. In one of the most well-known scenes in Plato?s dialogues, Socrates discusses his method for eliciting thoughtful discussion from students as philosophical midwifery, as he is able to sense when they are in the process of giving birth to an idea and Socrates helps it come forth. This approach to teaching would later be called the Socratic method, a series of questions and answers where the teacher assists in helping the students develop and expand upon their ideas and conclusions in a logical procession. Socrates and Theaetetus discuss three definitions of knowledge: knowledge as perception only, knowledge as true judgment, and knowledge as true judgment with an account, or further description or understanding of a thing. At the end of this process, the teacher and student agree that no final answer can be reached, in this fascinating and timeless masterpiece of philosophy. This edition follows the translation of Benjamin Jowett and includes a biographical afterword.