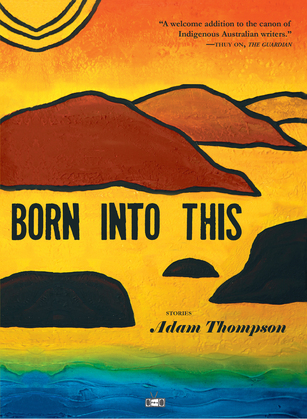 * Readings Prize for New Australian Fiction, Shortlist
* Age Book of the Year award, Finalist
* An American Bookseller’s Association Indie Next pick for “Great New Reads” for August
"A legacy of cultural destruction in Australia and the disappearance of the natural world loom over stories of Aboriginal rangers, untimely funerals and angry bees in this sharp fiction debut." —New York Times Book Review

The remarkable stories in Born Into This are eye-opening, razor-sharp, and entertaining, often all at once.

From an Aboriginal ranger trying to instill some pride in wayward urban teens on the harsh islands off the coast of Tasmania, to those scraping by on the margins of white society railroaded into complex and compromised decisions, Adam Thompson presents a powerful indictment of colonialism and racism.

With humor, pathos, and the occasional sly twist, Thompson’s characters confront discrimination, untimely funerals, classroom politics, the ongoing legacy of cultural destruction, and — overhanging all like a discomforting, burgeoning awareness for both black and white Australia — the inexorable disappearance of the remnant natural world.

"With its wit, intelligence and restless exploration of the parameters of race and place, Thompson’s debut collection is a welcome addition to the canon of Indigenous Australian writers."
—Thuy On, The Guardian