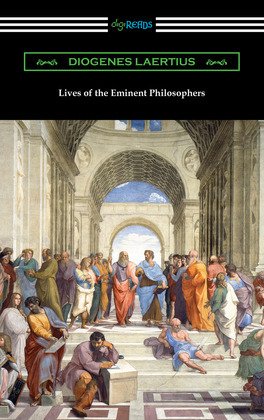 Lives of the Eminent Philosophers

Originally written in Greek sometime in the 3rd century, ?Lives of the Eminent Philosophers? is the historically significant collection of biographies of important Greek philosophers by Diogenes Laertius. Little is known about Laertius and his life, but his collection of the life stories and philosophical ideas of over eighty Greek philosophers is the most complete surviving history of these influential figures. Based upon sources that have long since been lost to time, Laertius tells of both the scandalous and touchingly human side of the philosophers of ancient Greece and then summarizes their important ideas and theories. Laertius shows how very human these famous thinkers truly were with stories of violent and jealous feuds, steamy love affairs, crimes, frauds, lies, and strange personal habits. He also opens a window into ancient Greek culture and shows how the different schools of philosophical theory developed over time and were influenced by each other. ?Lives of the Eminent Philosophers? remains an important and fascinating source of information on such famous figures as Aristotle, Plato, Socrates, as well as lesser known Greeks, such as Diogenes the Cynic and Zeno the Stoic. This edition follows the translation of C. D. Yonge.