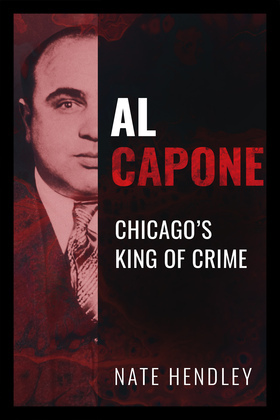 Chicago's King of Crime
by Nate Hendley (Author)
Buy for $9.99 Excerpt
Nonfiction News and investigations True crime
warning_amber
One or more licenses for this book have been acquired by your organisation details

Chicago mob legend Al Capone set the template for future crime bosses, offering a cautionary tale about the pitfalls of being an underworld leader.

Al Capone could have pursued an honest career and quiet life with his wife and son. Instead, he chose to become a towering mob boss in Chicago, overseeing an underworld empire based on bootlegging, gambling, prostitution, and other rackets.

Quick to recognize the value of sympathetic media coverage and alliances with local politicians, Capone amassed almost unimageable wealth, prestige, and power. He also had syphilis which affected his judgement and a violent streak which brought him to the attention of federal authorities. While rival gangs couldn’t kill Capone, he faced a more formidable challenge when bureaucrats began scrutinizing his tax returns.

This concise account tells the story of America’s best-known gangster in a succinct, descriptive manner.