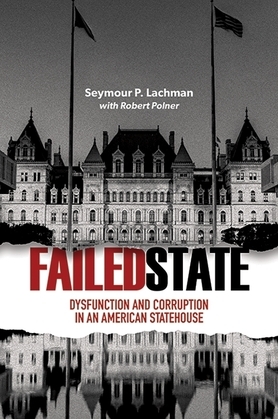 Failed State is both an original account of a state legislature in urgent need of reform and a call to action for those who would fix it. Drawing on his experiences both in and out of state government, former New York State senator Seymour P. Lachman reveals and explores Albany's hush-hush, top-down processes, illuminating the hidden, secretive corners where the state assembly and state senate conduct the people's business and spend public money. Part memoir and part exposé, Failed State is a revision of and follow-up to Three Men in a Room, published in 2006. The focus of the original book was the injury to democratic governance that arises when three individuals—governor, senate majority leader, and assembly speaker—tightly control one of the country's largest and most powerful state governments. Expanding on events that have occurred in the decade since the original book's publication, Failed State shows how this scenario has given way to widespread corruption, among them the convictions of two men in the room—the senate and assembly leaders—as well as a number of other state lawmakers. All chapters have been revised and expanded, new chapters have been added, and the final chapter charts a path to durable reform that would change New York's state government from its present-day status as a national disgrace to a model of transparent, more effective state politics and governance.